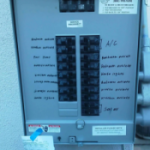 FPE panels are unsafe because they may not trip the breaker when overloads occur. Instead, your risk of experiencing a house fire is significantly higher.

The Dangers Of FPE Breakers

The United States Consumer Product Safety Commission warns Americans that Federal Pacific breakers are unsafe. It is common for these breakers not to trip during a short-circuit or overload. The breaker should trip to protect your home, but FPE breakers have a higher failure rate.

They can experience lock-up issues too. A lock-up occurs when the breaker trips and stops tripping. It will never trip again even if the circuit is overloaded. FPE panels are blamed for more than 2,800 electric fires each year.

Much of this has to do with the cheap materials Reliance used. In addition to this, there are several problems associated with Federal Pacific breakers.

Repairing a Federal Pacific Electrical Panel is not a good idea. Instead, you should replace it. Most qualified electricians will not repair FPE panels because they cannot guarantee their safety after that.

Do I Have An FPE Electrical Panel?

Is your home 20 to 70 years old? If so, there is a good chance that you have an FPE panel. Reliance Electric has gone out of business, so there are no new FPE panels. Electricians will find these panels in older homes.

When trying to identify your electrical panel, you should look for Federal Pacific Electric logos. Also, look for the name Stab-Lok.

You’ll need to replace the electrical panel. To do that, you will need to hire a professional electrician. The final price will depend on the electrician you choose. However, you can expect to pay between $1,500 and $2,000.

All Long Island homes will look better with a new chandelier. This elegant lighting fixture will make your home look much better while also increasing

Residential Electrical Generating An Unusual Humming Noise Residential electrical systems are responsible for generating sufficient electricity to power all the connected devices. What are connected

Your electrical system will experience problems from time to time. Some problems are rare but others are common. Even if you aggressively maintain your electrical